With a body size of 27 cm, Tachybaptus ruficollis (Little grebe) is the smallest member of the grebe family (Podicepididae). Due to its chubby figure, the bird appears to be even smaller. In Central Europe, the Little Grebe is quite a common waterbird. In its breeding plumage, it is dark above with a rufous coloured neck, cheeks and flanks, and bright yellow gape. The reddish brown is replaced by a dirty brownish grey in non-breeding birds. 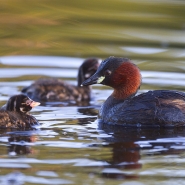 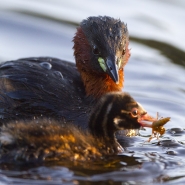 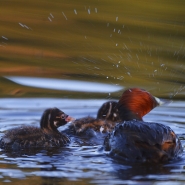 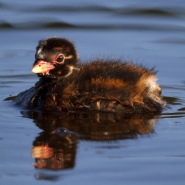 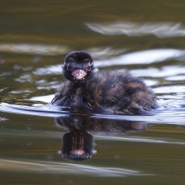 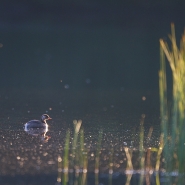 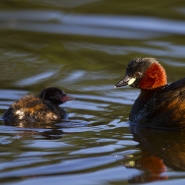 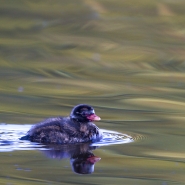 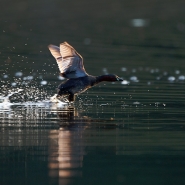 During breeding season between April and August, the high pitched quavering calls can be heard especially well on the sites “Schwarzes Wasser” and “Großes Veen”. Within the project area several breeding pairs successfully bring up their chicks on heath meres and moors every year. Up to three broods are possible in one breeding season.

The Little Grebe is an excellent diver and pursues its prey underwater. Aquatic invertebrates like snails, crabs, insects and their larvae as well as little fish and tadpoles contribute to their diet. Occasionally, they pick prey from the water surface or even catch flying insects by performing little jumps.

While Little Grebes show highly territorial behaviour during breeding time, they can be found in smaller coveys in winter.