The swimming Luronium natans is a 10 – 40 cm long hydrophyte with oval leaves and delicate flowers and growing on the edge of mostly low-nutrient waters with a mostly sandy bedrock in a crawling or swimming fashion. On the Lower Rhine, Luronium natans usually blooms from June to August. 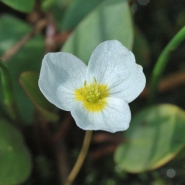 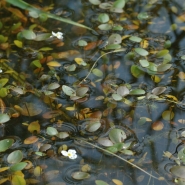 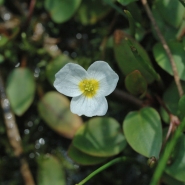 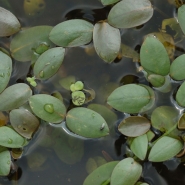 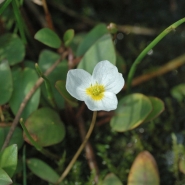 The species is sensitive to changes in its habitat. When nutrients are added to the water, be it because of agricultural activities or air pollution, or in the event of siltation, Luronium natans is swiftly replaced by other plants. A large decline in the entire Atlantic region has led to it being protected now all over Europe. In North Rhine – Westphalia, it is even an endangered species.

For the Life project, Luronium natans is a heath mere keystone species. It is an index species of the shoreweed communities. The only population in Schwarzes Wasser is endangered and is to be supported by suitable measures like desludging.