The largest lizard on the Lower Rhine, up to 24 cm in length, is characterised by a strong build with a thickset head, a wide brown stripe on the back and black eye spots with white cores. During the pairing season in spring, the male’s head and flanks are bright green. 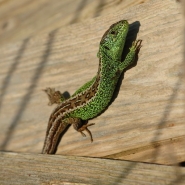 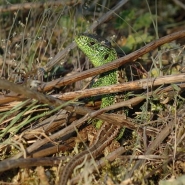 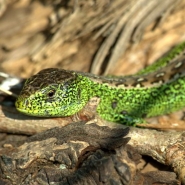 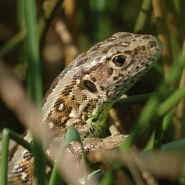 After having mated, the female digs little holes in sandy soils and lays its eggs. The young ones hatch only after a few weeks or months even. The eggs’ development period much depends upon the ambient temperature. The young ones lack the typical stripe on the back. Their colour is brownish with striking eye spots.

For Lacerta agilis, the heaths and the neglected grassland in the project area form an ideal habitat. Hence, it has quite a presence here. Elsewhere, however, it has become rare, with some populations showing a negative trend. This is to be counteracted in a targeted fashion.