With a body length of approximately 70 cm Coronella austriaca is not only the smallest of our snake species, but also leads a secretive way of life. Thus, it is not surprising that this species is rarely seen and is almost completely unknown. 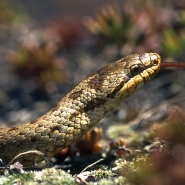 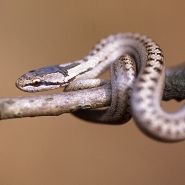 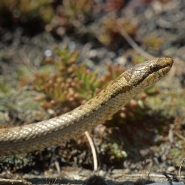 The scientific name „Coronella“ refers to the latin word for „coronet“, because of a pattern on the head that looks like a crown, horse shoe oder heart. The snake strangles her prey by winding her body around it. First and foremost it chases lizards and small rodents, but feeds also on eggs and other snakes.

At first sight Coronella austriaca looks like the poisonous Vipera berus and is quite often confused with it. However, the differences between these two species are clearly visible: In contrast to V. berus, Coronella austriaca has round pupils and no zigzag-pattern along the back.

Coronella austriaca is common almost througout Germany and prefers richly structured landscapes, where open and semi-open habitats (e.g. light forests, open landscape and open rocks) alternate on a small scale. Such an alternation of micro-structures is important to provide ideal places for hunting as well as hiding places during daytime and „sun-bathing“ areas.

Today, the loss and deterioration of habitats like edges of forests, river dunes and moors result in a declining number of snakes. For this reason, Coronella austriaca is listed in the Red List of Threatended Species of Northrhine-Westfalia as a „highly endangered“ species. Furthermore, according to the European Habitats Directive it is reported as a species of European significance in need of strict protection.