In autumn 2013 the heath mere „Schwarzes Wasser“ was the focal point of the project. Because only a few spots, where the keystone species Luronium natans (floating water-plantain) can be found are left on the water bank, the habitat for this marsh plant and its accompanying vegetation has been optimized. For this purpose, on a length of 200 m the topsoil has been stripped and the water bank has been desludged.

The aim of this measure is to improve environmental conditions for the endangered species of the Litorella uniflora association. Hopefully, Luronium natans, the shoreweed (Litorella uniflora) and the vanished water lobelia (Lobelia dortmanna) will benefit from this action.

The humous topsoil has been stripped by an excavator and the mud was removed from the bank, at which the relief stayed unaltered. More than 1.000 tons of silt and topsoil have been removed, trucked and professionally disposed.

Preliminary to this measure, the water level of Schwarzes Wasser had been lowered by temporarily unblocking an old drainage channel. The excessive water was percolated into the neighbouring moors and wet heaths. Previous to the desludging, bogbean (Menyanthes trifoliata)and beaked sedge (Carex rostrata) have been transplanted to the southern shore of the heath mere to prevent these plants from being harmed by the earthworks. 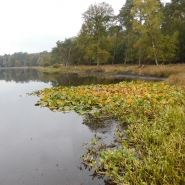 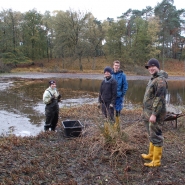 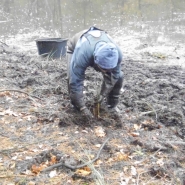 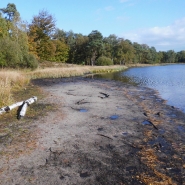 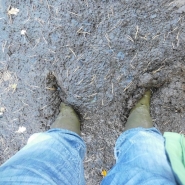 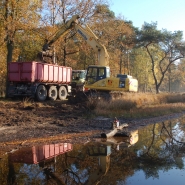 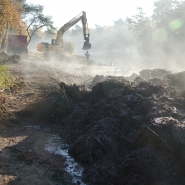 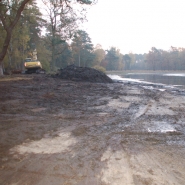 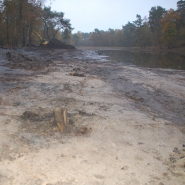